In Print: Planning for States and Nation-States in the U.S. and Europe 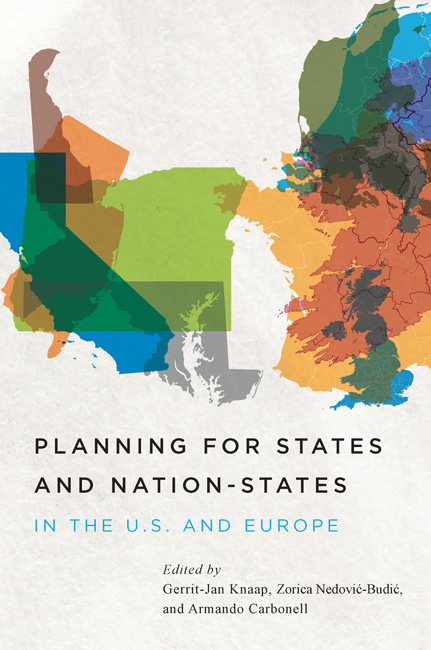 In theory, local land use plans and development regulations should be designed to carry out the policies of their higher-level governments. In practice, nearly all lower-level governments stubbornly resist direction from their states and nations. This book analyzes contemporary planning and public investment approaches used by American states and European nations to respond to the unwavering political push-back from their local governments.

Written by a knowledgeable slate of 26 experts, the book is edited by two planning professors: Gerrit-Jan Knaap at the University of Maryland and Zorica Nedovič-Budič at University College in Dublin, Ireland; and by Armando Carbonell, a senior fellow at the Lincoln Institute of Land Policy. Individual chapters are prepared by a mix of academics and planning agency officials.

The editors argue that better coordination in state- and national-level planning would provide more efficient infrastructure investments, greater resilience to climate change, and increased equity in economic development. But this ideal approach is frustrated by the demands of local governments for maximal autonomy. So what has been done by leading U.S. and European policy makers to combat the entrenched “love affair with localism”?

To find out, the authors compare the roles played by the U.S. federal government and the European Union (E.U.), along with the progressive land use and planning structures in five U.S. states (Oregon, California, Delaware, Maryland, and New Jersey) and five western European nations (Netherlands, Denmark, France, the United Kingdom, and Ireland). They treat them as valuable laboratories for exploring innovative ways of integrating planning strategies.

Recent U.S. federal policy efforts tend toward interdepartmental coordination, such as the Sustainable Communities Initiative launched by the Department of Transportation, the Department of Housing and Urban Development, and the Environmental Protection Agency that provides grants to local governments to encourage smart growth, including economic development and social justice. No appetite exists for reintroducing any form of national land use policy, last considered under President Nixon.

In the American states studied, plan making has moved from states to metropolitan regions, and local planning decisions are increasingly influenced by financial incentives in the form of targeted spending. Meanwhile, state plans are fading away. Implementation of the promising New Jersey statewide plan has bogged down, the award-winning Maryland plan has been crippled by county resistance to its influence over land use, California has delegated authority for meeting greenhouse gas targets to metropolitan planning organizations (MPOs), and Oregon has abandoned its effort to coordinate state agencies. Only Delaware has moved ahead with a statewide plan.

On the other side of the Atlantic, the E.U. seeks to influence member-nation planning through a spate of policy directives. One goal is “territorial cohesion,” recognizing the diversity of national contexts while trying to encourage E.U.-wide sustainable development. Spatial equity, raising the welfare of new E.U. members closer to that of existing members, is to be achieved through flexible territorial governance. This approach relies less on formal institutions and bureaucratic procedures than on informal negotiation, and less on political boundaries than on functional geographies, such as watersheds.

In the European nations studied, centralized land use planning and development control historically used in recovery from World War II has been transferred to regional and local levels. France long ago delegated planning responsibilities to regional governments. The Netherlands, formerly a source of strong national land use planning, declined to adopt its most recent spatial development plan, instead relying on market forces and more regional and local discretion. In Denmark, local governments have more responsibility for land use and spatial policy than at any time in history. The United Kingdom has devolved planning responsibility to Wales, Scotland, and Northern Ireland. Ireland is an exception, having adopted a national spatial strategy in 2002.

This book’s broad scope, authoritative authors, and detailed specifics make it the best available benchmark of leading U.S. and European planning. While decentralization and devolution are dominant themes, the picture is complex, the issues evolving, and the policies in flux. Looming issues that might demand more central planning, such as climate change and resilience, are not yet featured. The authors do not always agree on their interpretations, and the academic prose is sometimes dense. However, despite a lack of definitive metrics on what works and what doesn’t, this long and ambitious book sets the bar for understanding planning on both sides of the Atlantic.

Readers curious about the big picture can read the complete book’s 500-plus pages. For those who simply want a comparative overview, the editors’ introduction and conclusion provide a handy summary. And for anyone looking for an up-to-date perspective on one of the states or western European nations studied, the individual chapters by pairs of academics and practitioners are excellent.