The Relationship Between Subways and Urban Growth

Key takeaways from a new study on the effects of subway location and expansion around the world.

Tokyo is the largest city in the world, but ranks fifth in terms of its number of subway stations.(REUTERS/Kimimasa Mayama KM/CCK)

In the major cities of the world, subway systems are typically seen as a means to foster density, reduce reliance on cars, mitigate sprawl, and provide residents with access to affordable transportation. Recently, subways have also been seen as contributors to gentrification, as the advantaged and affluent colonize locations near stations to reduce their commutes and save time. But how do subways really affect urban development? To what degree do they promote density and centralization?

A new study by my University of Toronto colleague Marco Gonzalez-Navarro and Matthew A. Turner of Brown University helps to flesh out this relationship by looking at the effect of subway location and expansion on transit ridership, population growth, and the development of urban areas. To get at this, the authors developed a unique data set describing all subway systems in the world. Their data includes information on underground, surface, and above-ground rail transit lines, and identifies the latitude, longitude, and date of opening for every station. To examine the effect of subways on urban development, they utilize data from satellite images of the world at night (drawn from NASA satellites), and then calculate “light intensity gradients” for each city to measure its centralization. Finally, they draw upon data for population changes from the United Nations.

Ultimately, their analysis informs several key insights on how subways shape urban development in cities around the world.

Most subways were built relatively recently

While Americans frequently ride on subways and transit lines built at the turn of the 20th century, the study finds a substantial uptick in subway construction since the 1970s and ‘80s in cities around the world. In total, the report identifies 7,886 operational subway stations and 10,672 kilometers (over 6,600 miles) of subways across 138 cities as of 2010. Of these, 53 subway systems are located in Asia, 40 in Europe, 30 in North America, 14 in South America, and just one in Africa.

The following table lists the top 15 cities around the world with 100 stations or more. New York tops the list with 489 stations, followed by Seoul (360), Paris (299), London (267), and Tokyo (255). Based on the table, it’s clear that subways and subway stations do follow population size. But note the considerable variation in the number of subway stations per 100,000 people. New York, Seoul, Paris, and London all have more subways stops than the three largest cities in the world: Tokyo, Delhi, and Mexico City.

Contrary to conventional wisdom, the study also finds that subways do not necessarily spur population growth. Even though larger cities tend to house more extensive subway systems, the study finds no correlation between the size of a system and the size of a city. Although Asia houses the majority of the world’s large cities, and South America has the largest cities on average, both continents cannot compete with subway service in Europe and North America. This may have something to do with the fact that subways in Europe and cities like New York were built before auto use was common, at a time when cities were smaller. By contrast, Asia has undergone rapid urbanization in recent years and is more reliant on its cars and roads.

To control for the timing of subway construction, the study takes a close look at the 61 cities that opened subway systems between 1970 and 1990. In the five years before these new subways systems opened, cities saw their populations grow by around 12 percent. But, in the five years after, growth rates declined to a mere 8 percent. The study finds a similar decline in population growth in both the 20 years before and after the subway systems opened. As the authors note, “large cities build and expand subway networks but … these networks do not cause changes in subsequent population growth.”

Although one might expect cities with more extensive transportation to be denser and more concentrated in and around their downtown cores, the study does not find this to be the case. Instead, it finds that cities with larger subway systems are less centralized. In fact, the addition of one standard subway line causes a 0.5 percent decrease in centralization (measured by the concentration of satellite light) in the city center. This effect is still quite a bit smaller than that of roads and highways, which, according to other research, account for up to a 9 percent decrease in centralization. In particular, the study finds North American cities with subway systems to be more spread out than most.

That said, across the world, subways stations are typically located close to the center city, with the density of stops and stations decreasing with distance from the core. On average, roughly 84 percent of subway stops are located between 1,500 meters and 25 kilometers (about a mile to 15 miles) of the city center.

The study also provides a more detailed look at the subway systems of six cities of different sizes around the world—Boston, Singapore, Mexico City, Beijing, Tbilisi (in Georgia), and Toulouse (in France)—as shown in the figure below. In the top row, Tbilisi and Toulouse represent some of the smallest cities in the sample, with only 21 and 37 stations respectively. In the middle row, Boston and Singapore represent above-average subway systems, with 74 and 78 stations. And in the bottom row, Mexico City and Beijing represent some of the largest cities in the sample, with 147 and 124 stations.

In each of the six cities, subways tend to be centrally located, and only a small part of the city is located within walking distance of a subway station. 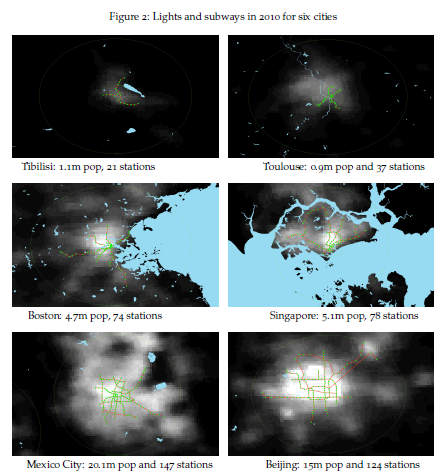